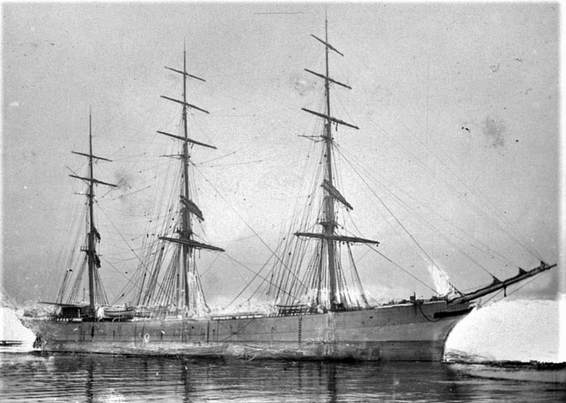 ​She was an iron ship of 2052 Tons gross, 277 feet long, 40 feet beam and 24 feet in depth, and could transport over 3000 tons of coal in her hold. She was built & launched in 1883 by owners Forrest Hall Ltd including Mr. R H Fry of Liverpool.
The Forrest Hall was a three mastered full rigged sailing ship and her normal crew would have been 25, however on the night of the great storm, as she was returning “empty” from Bristol to Liverpool for repairs, she only had a main crew of 12, plus 6  (5?) young apprentices.
N.B. official figures indicate total crew of 15
One source names the commander of the time as Captain James Aliss, an illusive figure in today's research.
N.B. Full rigged means all masts carried square sails
​
Mr. R.H Fry, owner of the Forrest Hall donated £75 towards the costs of the silver watches and chains presented to each crew member of the louisa Lifeboat. Coxswain  Jack Crocombe  and Second-Coxswain George Richards gold watches had gold chains Each crewman received £5. The costs for repairing the Exmoor stone walls, and the Porlock cottage, plus flood damage caused to the Lynmouth lifeboat station totalled twenty seven pounds, five shillings & six pence. (£27-5s-6d).
Louisa’s heroic rescue of the Forrest Hall ship was not officially recognised by the presentation of the RNLI’s “Victoria Cross” Gold, Silver or Bronze Medals which was one of the main things we hope might be corrected posthumously by producing the Louisa animation.

1889 bound for New York she went ashore near Calcutta. Floated off at high water.

1901 from Astonia (USA) grounded for seven hours at Bristol. Floated off.

1908  January, report in Cardiff Times, death at sea of Captain.
Barry Captain William Hansard on his first voyage with this vessel died at sea while on voyage from Barry to Taltal (Nortern Chile) with a cargo of coal.

Forrest Hall was a frequent visitor to the Bristol Channel. 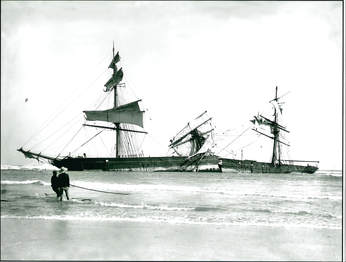 THE “FORREST HALL” NEW ZEALAND SHIPWRECK 1909
Research by Dave Reynolds/Great British Entertainment Ltd with the assistance of Steve Collins – descendent of Forrest Hall’s Captain John F Collins.
​
“A Brief Summary of the Historical Events”
The wreck of the full-rigged Forrest Hall cargo sailing ship, on the coastline of Ninety Mile Beach in the Far North tip of the North Island of New Zealand since 27th February 1909, has always been thought of as a “murder” scene. She was an iron ship of 2052 tons gross, 277 feet long, 40 feet beam and 24 feet in depth, and was built in Liverpool UK in 1883. She was enroute from Newcastle, Australia with a cargo of 3,127 tons of coal enroute to Antofagasta in Chile, South America. It was the captain’s intention to sail through Cook Strait or round to the South Island of New Zealand.
Her stranding was described by the subsequent inquiry as the only known case of a ship going ashore in a calm sea and in clear morning daylight conditions. Captain John Fenn Collins apparently ignored his first officer’s concerns that the ship was heading towards land, and the captain said he would carry on so that he could make a good tack. At the last minute though, the first officer ordered the helm to be put up, but the Captain countermanded that order and she struck the beach almost immediately. Later, there were rumours that the Captain must have been in ill-health to take such deliberate poor actions as it was reported that he had been having epileptic fits on the voyage.
CAPTAIN CONVICTED.
There were also rumours of drunkenness amongst the ship’s crew. The Captain’s brother, Charles Miller Collins, who acted as third officer, was concerned at his brother’s ill-health. Asking the Chief Officer to keep an eye on the Captain, he was later observed as intoxicated. At the marine inquiry convened in Auckland a few days later, Captain Collins was found guilty of negligence, his certificate was suspended for two years and he was ordered to pay costs.
CAPTAIN’S GRATITUDE
After the ship was wrecked and all the crew made it to the shore, Captain Collins and his first mate headed for the nearest village, Parengarga to raise the alarm. The Maori villagers looked after the beleaguered crew and in gratitude for their kindness; Captain Collins presented them with the ship’s bell. It was later donated to Te Hapau School, Parengarenga Harbour where it proudly hangs in the school’s grounds. Wreckage of the ship can still be seen at low-tide in its watery grave. 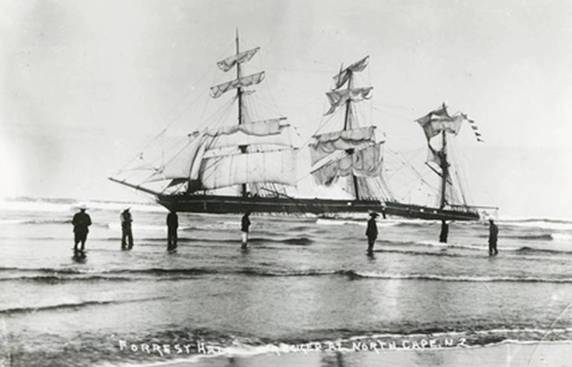 Summary of Events.
The Jane Joliffe tugboat was towing the 1900 ton Forrest Hall, a 297 feet, three masted fully rigged iron hulled, merchant sailing ship, out of Avonmouth Docks into the Bristol Channel, with the intention of towing the ship beyond Lundy Island on her way into the Irish Sea, when a North-West force 9 Gale headwind blew up. The ship was to travel from Bristol to Liverpool with no cargo, only ballast and a basic crew of eighteen, which included five apprentice sailors.  The Forrest Hall was going to Liverpool for a re-fit.
At the start of the voyage the Jane Joliffe tried to signal the ship that they should abandon the trip and return to Bristol because of the high waves and winds which were already causing the vessels problems. However, the Captain of the Forrest Hall couldn’t see the signals because of the poor visibility, heavy rain, flying spray and thick-black smoke from the tugboat’s smoke-stack.
In heavy seas, when they were west of Lundy Island, the tow-rope (hawser) parted, causing the two vessels to collide with each other, whilst attempting to reconnect the tow, damaging the rudder and steerage of the ship.
The tugboat was unaware how badly she had damaged the Forrest Hall in the collision.
The ship spun around broadside, with the howling gale pushing her back up the Bristol Channel. There was no response from the wheel as it spun furiously in the crew’s hands.  “By God! She’s broken her rudder! Call all hands, Mr Mate. Strike all sail and let go both anchors!” ordered the Captain. The anchors were no answer, as the Forrest Hall was being blown towards the rocky North Devon & West Somerset coastline. The ship was out of control.
Jane Joliffe lost sight of the ship as night fell on Thursday 12th January and because they later found steerage gear components floating in the sea they feared that the ship must have foundered on rocks. Despite their best efforts they couldn’t locate her.
The damage to Jane Joliffe was slight, however the crew decided to resume the search for survivors and debris. Not finding any wreckage they backtracked their zigzag course searching towards Exmoor’s rocky coastline.
Meanwhile the crew of the Forrest Hall could do little in the now Force 9 NW Gale. As the ship could no longer be steered despite dragging her anchors she was being blown towards the treacherous Exmoor rocky coastline.


As night fell, the Forrest Hall continued firing distress rockets where they could possibly be seen from the coast in the hope that they might be rescued from Ilfracombe, Lynmouth, or even Watchet (RNLI) Royal National Lifeboat Institution lifeboat stations.
Another concern for the ship’s Captain was the water depth as she was being blown towards Porlock Bay and the low lying rocks off Hurlstone Point. The crew were regularly checking the depth, and firing rockets which were seen by a local coastguard: Harbourmaster & Landlord (Tom Pollard) based at The (Lower) Ship Inn in Porlock Weir. Tom got his son to take an urgent message up to the Postmaster in Porlock, who immediately telegraphed the Watchet lifeboat station. However, because of the stormy seas the Watchet lifeboat was unable to launch!
So around 7.00pm the Lynmouth Postmaster/RNLI was sent a telegram asking - can the Lynmouth lifeboat help, which started off the LOUISA rescue.......
Following repairs, the Jane Joliffe and her sister-tugboat  (Sarah Joliffe) early next morning travelled the route looking for the Forrest Hall, only to discover to their amazement it being marooned in Porlock Bay and was still generally in one piece.
Both tugboats towed the ship away from the rocks by its stern, with assistance of the Louisa crew acting as Forrest Hall’s crew, all of the 10 miles to Barry with Louisa in-tow.
It was still stormy, but by the time they reached Barry Docks the storm was waning.
The Forrest Hall was anchored off-shore in Barry Bay, and Louisa’s crew were fed & rested at Barry’s Shipwrecked Mariners Society, and then stayed the night at a dock hotel.
The following morning (14th) as the Forrest Hall was being repaired, Louisa was heading back to Lynmouth being towed part way by a passing steamship.
Coxswain Jack Crocombe and his Louisa lifeboat crew finally arrived back in Lynmouth some 40+ hours later.........

Crewing a Full Rigged ship - a crew of about 30 was considered reasonable for efficiency.
Merchant vessels would often reduce crew in the name of profits. Crews of under 20 were common even on full rigged ships.
Forrest Hall would seem under-crewed on the 12th January in the light of the prevailing weather. Perhaps to save money, especially if she included apprentices amongst her 15 crew. According to the report above, she was bound for Liverpool for a refit (repairs).
Full rigged ships were rapidly losing popularity with owners at that time and being replaced by better vessels.
Apprentices on board.
Ships of over 800 tons could carry the maximum number of apprentices, which was six.
Their ages could range from as young as 12 to 17 years when first indentured and they must serve 4 years.
​The majority of deep-sea vessels carried apprentices as legislation made it obligatory for ship owners to do so.
(From a study by V C Burton on 19th C merchant marine.)

Author's note.  William Richards of the Louisa lifeboat crew that went out to assist the Forrest Hall in January 1899 was himself only a boy aged sixteen. We can only wonder at the strength and will of such young souls. Inspiring indeed.
The tug boat Jane Joliffe. She was converted from twin funnels to single during service.