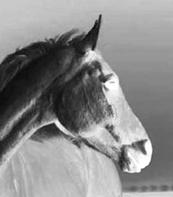 Four Horses Die on the way -
​
These days we might well look at the use and death of some of the horses as cruel. In 1899 horses were still the predominant method of transport. Likely most of the horses used were accustomed to such roads, perhaps pulling the coaches that plied the routes east and west, though the desperate need for horses to haul the lifeboat and carriage in a hurry, probably didn’t warrant too close an inspection of the animal’s fitness. Once on the moor, in darkness and driving rain, no doubt all human eyes were fixed on the ground in front of them. They were all in this life or death struggle together, not a statement to be underestimated. Probably the first thing they noticed was when a horse fell. On occasions sudden death is due to exertion bursting a blood vessel. (Because the aorta is the main blood vessel coming out of the heart, the horse quickly haemorrhages and dies. There is no warning that this will happen and death occurs very quickly--seemingly before the horse hits the ground.)
We can only surmise how difficult it was to remove a dead horse from its harness. (A harness they could ill afford to lose or damage) The carriage would cease to move, soaked painful hands would struggle in the dark with harness buckles to free the body, then with enormous difficulty drag it out of the way. A horse could easily weigh half a ton. The road must be cleared for the lifeboat to continue or every sacrifice was in vain. The storm keeping Raven and fox at bay while the corpses marked the route across the moor, perhaps to be collected some days later, perhaps not. The reality of the day - No sanitised version for the news media, just the awful truth.
It is quite possible that some of the horses had already done a day's work and at 7 pm were resting in stables, before being asked to work another 10 hours in appalling conditions. It has been said that the lifeboat carriage was returned to Lynmouth the next day. Without Louisa the carriage still weighed near 7 tons, so the return journey was no picnic either. Needs must, but the difficulties cannot be underestimated for man and horse, unless the wind had abated they would return to Lynmouth struggling head on with the remnants of the gale and through the mud of the dirt road. An incredible journey of its own.

Coach travel-  it is said that the Lynton to Minehead route took 3 hours by coach and benefited from fresh horses at stables along the way. It would have arrived in Porlock in about 2 hours. (6mph or about 9kph). Louisa's journey took 10 hours with no fresh hoirses (About 1 mph or about one and a half kph) and put's the difficulties in perspective. (Fast walking pace is about 4 mph or about 6kph)

A Gutenberg image with thanks
​The last horses :-  after 1904 the use of horses diminished due to farmers turning to mechanised tractors. The number of horses was also reduced as the few farmers that had horses were reluctant to see them injured. In some cases the lifeboat crew would have to look so far away for a team of horses that the delay made a launch almost pointless. Inexorably the use of horses faded, until around 1935 when they were all but finished in the service.

In Bridlington 1915, in thick snow, two horses and a rider drowned as the carriage broke in the waves. Although the lifeboat stayed afloat it was forced ashore. With the carriage broken, she could not be relaunched. All 12 souls on board the stricken ship she went to save, drowned.This is the history of incredibly brave people in tragic circumstances. 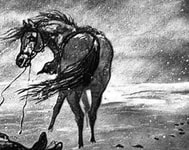 image credit to Gutenberg
The cost of a horse
Though not definitive, the price of a working horse around 1899, might be £20 to £30 on the open market in Devon.
​An agricultural labourer's weekly wage at the same time was about 14 shillings (just under 75 pence in decimal currency)
The loss of a horse, as in the Louisa rescue attempt, was therefore financially quite considerable for its owner.
​                                                             ( to the horse of course, it was everything.)
Comparing the weight of a coach with that of a lifeboat and carriage.
The weight of a coach was about one ton and they used six horses to pull the coach up Porlock and Countisbury hills. Putting it into perspective, Louisa lifeboat on her carriage weighed ten tons and it had to be hauled on a totally dark and very stormy night - the sort of effort never required of these coach horses before nor since. No surprise that four horses died on the journey. 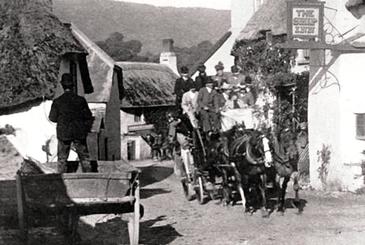 This laden coach is travelling in the direction of Porlock Hill. Pulled only by four horses, we know that six were needed for the notoriously steep hill (one in four in places) and that the team will be changed at Culbone stables some 3 miles or so away at the summit. Chances are that some passengers may have to walk. This old picture shows how narrow the road was, with the horse drawn cart on the left having to wait. Beyond the coach and down hill we can just make out another pair of horses, perhaps these are the extra pair for the ascent. The road is dirt and stone, if it were tarmac then the horses' hooves would slip.This is one of the reasons that horse drawn coaches were still in use well into the 1900s.
​
​
(All credit to whoever put this beatiful photo on the web.- It is surely too important not to share.) 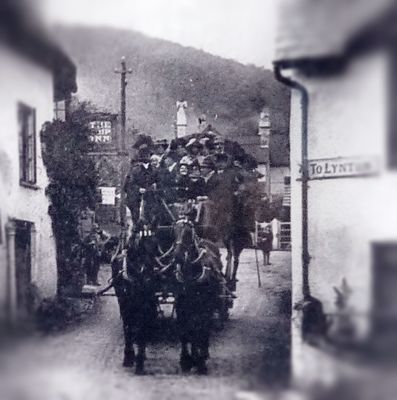 Coach and horses entering Porlock from Lynton one must question the centre of gravity of these loaded coaches. Nerves of steel they must have had on the hairpin bend. 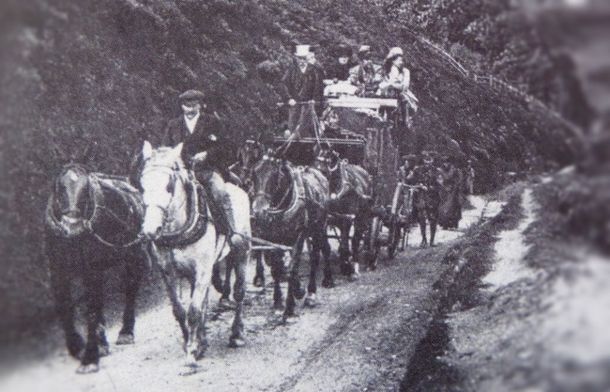 Coach and horses on Countisbury hill. Horses such as these pulled the lifeboat up this hill in darkness and storm. The steepest section of hillis now behind them but it is a long way to the summit. Some are forced to walk to reduce the load, this gives some indication of the exertion facing the horses.
​It is reported that as many as twenty four (24) passengers with baggage could be accommodated on each coach. That is about one and a half tons. It is not therefore surprising that some of them had to alight in order that the horses could climb the hill. 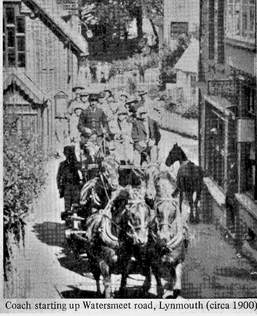 It was not unknown for horses that slipped on ice, to be unable to rise again. Horses were usually shod with winter shoes where such weather conditions applied.
The image shows French army horses on the
​ Swiss border during the franco prussian war.