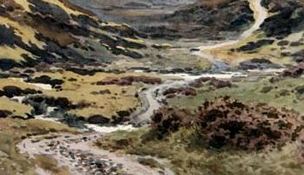 image by Gutenberg
​ At the beginning of the 19th century this part of Devon was all but cut off from the landward side. The roads, such as they were, being the worst in the country, with mud, deep ruts and large loose stones that resembled a stream bed more than a road.  Even the route from Barnstaple to Ilfracombe was only a cart track.
Lynton was ten miles from the nearest road around this time.
Local traffic over the moor was by pack horses and sledges.


About 1820, the Turnpike roads were being legislated and 1825 saw the beginnings of road construction at Lynton. By 1830 a coach service could actually use the road from Barnstaple three times a week.and then in 1843 a light coach service ran eastwards to Taunton each day. 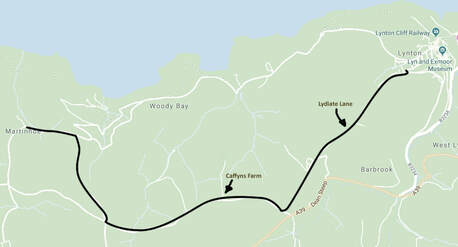 Thanks to Ken Blakey for showing the route of the original road to Lynton
The roads used back then are often on entirely different routes to the roads we use today. There were Toll houses at Pilton, Shirwell and Parracombe as well as at Lynton. There are reports that the horses climbed Loxhore Hill and we know that the old road ran through the village of Parracombe (now bypassed).
​The old Barnstaple road in Lynton today is a single track way unsuitable for vehicles.But in 1765 it was virtually the only road away or to Lynmouth and it only went to Martinhoe, a tiny village itself. None of the other roads shown on the map existed in those days. The Woody Bay to Lynton toll road may not have been present until the 1850s when Lee Abbey was built. 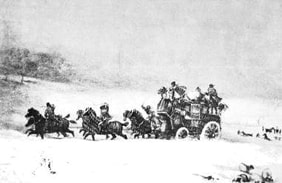 Storm of 1836 mail coach Exeter Thanks to Gutenberg 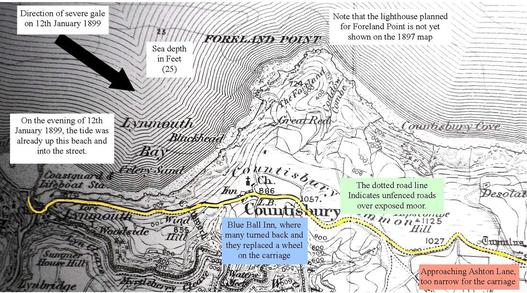 Carriage accidents on the hills near Lynton:-
Despite the amount of carriage traffic there were relatively few accidents, though when they occurred it must have been terrifying for the driver and passengers.

August 1898 (six months before the Louisa incident) a carriage was being driven from the railway station towards Lynton along the Shambles when a trunk fell on a horses back and it bolted. The driver was thrown off as the horse and carriage hurtled down hill, negotiating Lyn Way in safety but overturning at Taylors corner and throwing the occupants out of the vehicle.

Three years later, in August 1901 servants of Sir George Newnes were being conveyed from the railway station to his house when the horse took fright and bolted by Lyn Bridge.The driver lost control on the steep hill and where the road divided towards Lynton or Lynmouth they struck another carriage. Both overturned and in the carriage that was struck three people were injured in a serious manner. One poor soul who was only on a day visit, succumbed to his injuries and later died.
The place of this accident was the scene of several deaths in previous years. The collision in some ways was fortuitous in that the road becomes much steeper after this junction and has two sharp bends and a steep drop to the right. It is almost certain that more would have died in this instance.

May 1904, a carriage conveying persons from Watersmeet to Lynmouth turned over as the driver tried to control a bolting horse. The bend in the road too severe for the speed. All persons were thrown out of the carriage but without serious injury.
*************
A galloping horse can easily manage 30 miles per hour. Who of us wants to hit the road or a tree at that speed?
​It must have been truly terrifying when a horse took fright and bolted.
************
One might ask how difficult it was to manage the horses on the night of January 12th 1899, taken from their stables with the wind howling, darkness, flickering lights, flapping coats, the noise of men shouting, horses neighing, stumbling, slipping .....  hour after hour ... horses dying, bodies dragged to one side, the roaring of the sea, the fallen trees.
​
A wild night indeed and not one for the feint of heart. -
And tomorrow they must walk the long road home passing their dead kin on the way, the fox and gull already at work. 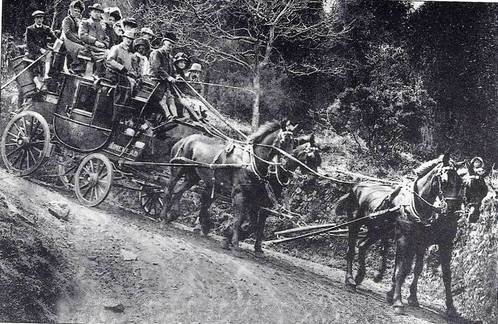 This stunning and evocative image of horse transport around the turn of the century (19th/20th) shows the state of the road near Porlock and as used by the Louisa crew and the ten ton carriage and lifeboat in January 1899. Source as yet unknown but our grateful thanks go to the foresight and perfect skill of the photographer.