Built by Woolfe and sons the photo shows Louisa in 1903 at sea . Unknown source
Woolfe and Sons  boat builders of Shadwell London

Wednesday 9th August 1871 in London docks in Shadwell basin, the 33 ft lifeboat called ‘Charley Lloyd’ was trialled for the RNLI and for the boat’s sponsor.
The lifeboat was launched from the quay by releasing her from her carriage and dropping 15 feet (5 Metres) into the water. At first being submerged the boat soon surfaced and cleared itself of water. By force, the boat was turned keel up and when released, within 23 seconds was righted and drained of water. Other tests including how many persons could board were all concluded satisfactorily. From 1876 they built 143 lifeboats.

Our gratitude goes out to those who provide us with such interesting and valuable information.
One can only wonder at the effort put in on that day by the crew of Charley Lloyd. Amazing success.
Lifeboat trials July 1872

With a crew aboard and filled with water to the outside level, the freeboard was just over 20 inches and when a further fifteen passengers were added the freeboard remained at 12 inches (about 30 cms).
It took eight men standing on the gunwale to bring the boat awash.
A minimum of two water relieving holes at 3 inches apiece are required as is a rail running the length of the centre of the boat to prevent crew from being thrown all to one side.
Woolfe and Sons were awarded the Gold Medal by the Royal Arts Society. 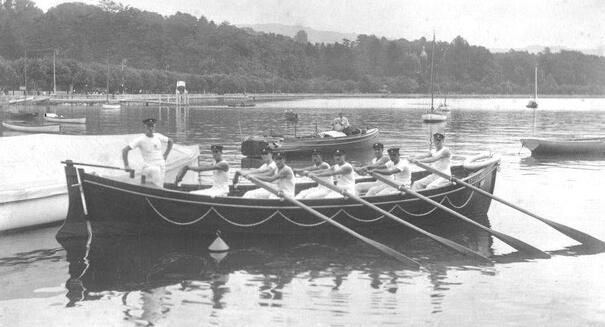 One of the first life boats, launched in 1887 in Lausanne  Switzerland
Etoile du Léman ( Star of the lake of Geneva ) A lifeboat built by Woolfe and sons.
Thomas William Woolfe took sole charge of the boat and barge building business December 16th 1845. Working from lower and middle Shadwell and Britannia Yard, Limehouse. They also built for the West Indies and for West Coast Africa.
Thomas died 17th February 1878 and his son Thomas Samuel Woolfe took over.


Many thanks to Jean-Philippe Mayerat, Swiss boat builder, for his inspiring interest and his assistance in this research